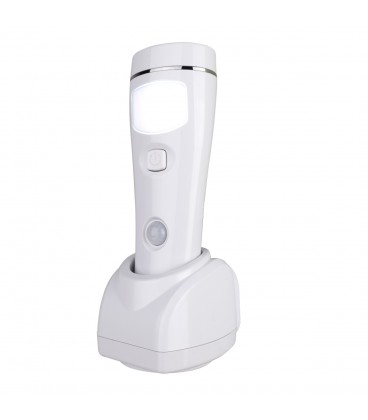 The new and improved Sensor II comes with a single high-powered COB LED producing 130 Lumens when used as a torch. While in power cut mode the top LED produces 15 Lumens of light which will give ample light in an emergency and prolong the life of the inbuilt rechargeable Li-Ion battery.

Removing the Sensor II from its charging cradle will active the top COB LED in 15 Lumen mode. To use as a torch push the button once and you will have a 130 Lumen torch, fully charged and ready to go when you need it.

The Sensor II includes extra night light features. Motion Sensor mode, a PIR motion sensor will activate the 5 LED, 40 Lumens night light when movement is detected. Dawn to Dusk mode, with a push of the button, (while in the charging cradle), you can toggle Dawn to Dusk mode, where the 5 LED night light will emit a low 0.3 Lumen glow all night and then when motion is detected increase to 40 Lumens providing a safely lit area.

The sensor can swivel in its charging base to point the sensor in the direction of the walkway. If you don't want to use the sensor function but want the emergency power failure and torch functions just turn the sensor to face the wall.

has been added to your wishlist.